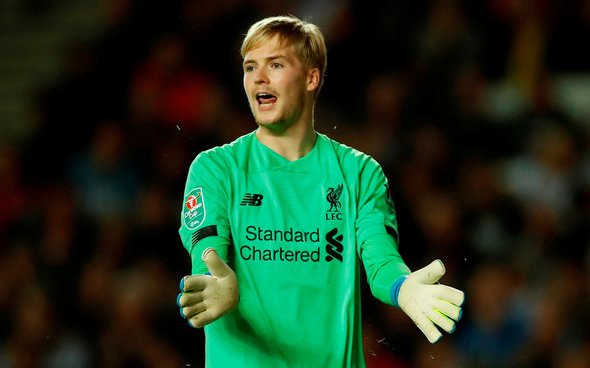 Liverpool goalkeeper Caoimhin Kelleher has provided a positive update on his fitness following a knee injury he sustained in late February.

The 21-year-old damaged knee ligaments a few weeks ago and he has been rehabilitating at home under the guidance of physiotherapist Joe Lewis and rehabilitation fitness coach Dave Rydings. Speaking to Liverpool’s official website, he said that he is almost fully recovered from the injury.

While the cessation of football due to the coronavirus pandemic has undoubtedly been frustrating for some, and has forced Kelleher to recuperate at home due to the UK’s lockdown, it may have perversely worked in the young Irishman’s favour.

The dearth of matches over the last month has enabled the 21-year-old to recover in the knowledge that he wasn’t missing out on opportunities to obtain some rare game-time for Liverpool and, depending on when the Premier League resumes and how results go once it does, he may yet be given a few chances to feature in the division over the summer.

A report from ESPN claimed that the EFL are hopeful of a return to action on 6 June, which may offer a clue as to a possible resumption date for the Premier League. If the English top flight does return in or around that time and Liverpool quickly obtain the two wins they need to be crowned champions, Jurgen Klopp might use the final few fixtures to reward the patience of rarely-seen youngsters such as Kelleher and give them Premier League minutes in matches where there is nothing at stake for the Reds.

The short-term outlook seems brighter for the Irish goalkeeper, although a transfer report from Italian media could cast doubt on his long-term Anfield prospects. According to Tuttomercatoweb, Liverpool have joined Juventus in eyeing up a possible move for young Croatian ‘keeper Ivor Pandur, who currently plays with Rijeka in his homeland.

While Kelleher’s senior game-time at Liverpool has been limited to four domestic cup matches, 20-year-old Pandur has broken into Rijeka’s first team since the turn of the year, playing in each of their last seven league matches and keeping four clean sheets (as per TransferMarkt). He has achieved six shutouts from his 10 senior appearances so far for the club and conceded just eight goals. Liverpool’s Irish youngster, by contrast, has been beaten 10 times in his four senior appearances, with both Arsenal and Aston Villa putting five past him in the Carabao Cup.

Kelleher has shown tremendous determination to recover from wrist and knee ligament injuries in recent months and his patience and resilience deserves to be rewarded with further first team game-time, hopefully in the concluding weeks of the Premier League season. However, Liverpool’s reported interest in a younger goalkeeper playing regularly and with a better statistical record could once again leave the Irishman wondering whether his chances of a true Anfield breakthrough are slimmer than ever.

Liverpool fans, are you hoping that Kelleher could get more first team action in the months ahead? Do you think he will get many opportunities with the Reds in the future? Comment below with your views!