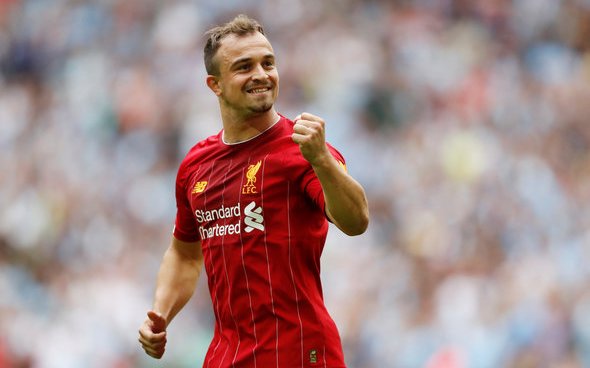 Liverpool could be better off keeping fringe players such as Xherdan Shaqiri and Dejan Lovren for another season rather than selling them if no adequate offers are made.

That is according to James Pearce, who made the claim in a Q&A for The Athletic when asked whether the Reds’ summer transfer activity may be affected by the possible impact of coronavirus on the transfer market.

Shaqiri and Lovren had both been linked with possible exits from the club this year. The Liverpool Echo claimed that the Swiss winger is expected to move on from Anfield in the summer, while the Daily Express reported that the Croatian defender could also leave and has been wanted by clubs such as Tottenham, Arsenal and AC Milan.

However, Pearce suggested that Liverpool should think carefully before blindly accepting any offer for either player. He told The Athletic: “It will be interesting to see what happens with the likes of Xherdan Shaqiri and Dejan Lovren. It might be that Liverpool don’t get the offers they were expecting for them, and if that’s the case they may well be better off keeping them on board rather than selling.”

Given that neither player had been featuring regularly for Jurgen Klopp’s side this season, it is no great surprise that they have both been tipped to leave the club this summer. Lovren has started nine Premier League games, considerably fewer than centre-back team-mates Virgil van Dijk and Joe Gomez (as per WhoScored). Although he has had more league starts than Joel Matip, the Cameroonian had been a regular first choice until incurring a knee injury in October, with Gomez difficult to dislodge since then and Van Dijk a permanent starter.

Shaqiri has been an even rarer presence in Liverpool’s line-up in recent months – a 2019/20 track record of two Premier League starts, 10 appearances in all competitions and a mere 256 minutes of game-time highlight how peripheral a presence he has become in Klopp’s squad. Although injuries haven’t helped, it is a worrying sign for his Anfield future that he has only had a single minute of league action since mid-December.

With the pair playing little part as Liverpool look set to cruise to the Premier League title, it seems fair to suggest that neither of them would be greatly missed if they were to move on in the summer. However, if the Reds struggle to bring in a centre-back or right-sided winger in the next transfer window, there could be a strong case for keeping both Lovren and Shaqiri as squad players to ensure that there is adequate cover for those positions.

Therefore, Liverpool ought to only consider selling either of them if decent transfer bids come in, as Pearce has said, and if the Reds ensure that they bolster their respective positions to justify offloading the pair.

Liverpool fans, do you think Shaqiri and Lovren should be kept if no adequate offers are made and if the Reds aren’t able to add reinforcements in the summer transfer window? Comment below with your views!