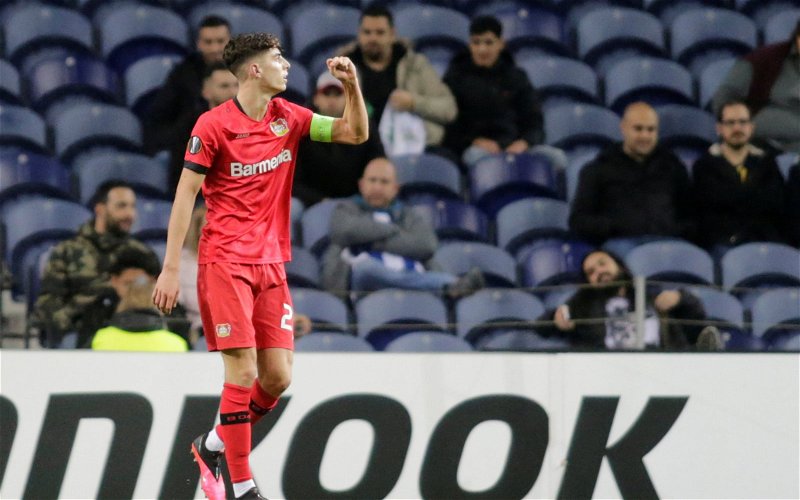 Liverpool’s hopes of Kai Havertz appear to have been dented by a reported declaration from the Bayer Leverkusen playmaker that he would rather remain in the Bundesliga.

According to Sky Germany‘s transfer expert Marc Behrenbeck, the 20-year-old is keen on a move to Bayern Munich, whose manager Hansi Flick is a huge admirer of the young star. Behrenbeck told Sky Germany: “Flick wants Havertz, Havertz wants to go to Bayern, everything ultimately depends on the financial situation.”

Liverpool had been linked with the Bayer Leverkusen man by the Daily Express, who claimed that Jurgen Klopp has been monitoring the 20-year-old for some time. However, the player’s reported preference for Bayern Munich seems to have struck a blow to the Merseysiders’ prospects of landing him.

Why would Liverpool have wanted Kai Havertz at Anfield?

Havertz doesn’t turn 21 until June but has already accrued a wealth of senior experience, with 139 appearances for Bayer Leverkusen’s first team and 110 of those coming in the Bundesliga, in addition to seven senior caps for Germany. This season, he has struck 10 goals and provided eight assists in 34 games for his club across 2,925 minutes of game-time, averaging one goal per 292.5 minutes (as per TransferMarkt).

The youngster plays mainly as a central attacking midfielder but has also been utilised to great effect on the right wing, scoring five goals from 10 games in that position in the current campaign. He can also be used as a centre-forward or deeper-lying midfielder, giving managers tremendous flexibility to utilise him in a variety of roles. [via TransferMarkt]

His scoring average in 2019/20 is better than that of Liverpool centre-forward Roberto Firmino, whose 11 goals have come in 3,339 minutes (one per 303.55 minutes), and he has also found the net more often than any of the Reds’ current midfielders this season. He has the confidence to shoot for goal regularly – his 1.6 shots per game average is bettered by only the first choice front three at Liverpool – and his match average of 2.3 key passes (only Trent Alexander-Arnold at Anfield has a higher average) indicates an aptitude for unlocking massed defensive units.

Havertz blow would be compounded by Xherdan Shaqiri leaving Liverpool

As mentioned above, Havertz has been effective as a right winger at Bayer Leverkusen when moved from his primary attacking midfield role. Liverpool’s current options in the right-sided attacking area are Mohamed Salah and Xherdan Shaqiri, with the latter likely to depart Anfield in the summer (as per Liverpool Echo).

The Swiss winger may have featured only intermittently for Liverpool in recent months but his exit would leave no real backup for Salah on the right and the Egyptian could miss a chunk of next season if he is at the Africa Cup of Nations in January with his national team. The Reds have also been linked with Borussia Dortmund’s right winger Jadon Sancho (as per Daily Mail) but a recent report in The Mirror claimed that they are not in the hunt to sign the England international.

Aside from the potential sparsity of right-sided attacking options, Havertz snubbing Liverpool would also deprive Klopp of the ability to add a potent attacking midfield presence and give him greater flexibility to try a 4-2-3-1 with the German playing directly behind the centre-forward. There is no certainty that the 20-year-old will go to Bayern Munich as of yet but, if he has his heart set on a move to Bavaria, that would seem to significantly lessen the likelihood of Liverpool luring him to Anfield, unfortunately.

Liverpool fans, are you disappointed to hear that Havertz reportedly favours a move to Bayern Munich? Do you now think it is unlikely that he will come to Anfield? Share your views in the comments section below!