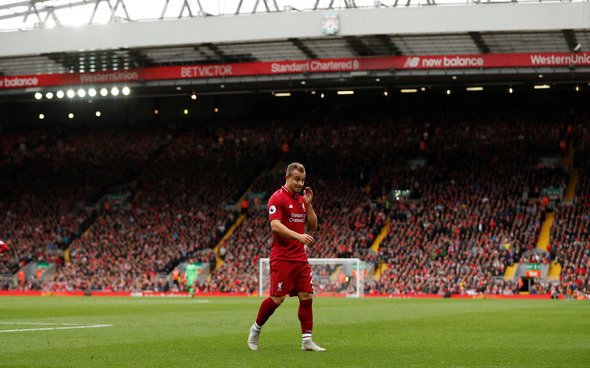 Liverpool are likely to significantly alter their valuation of Xherdan Shaqiri in response to changing market circumstances amid the coronavirus pandemic.

As reported by Football Insider last month, the Reds’ director of football Michael Edwards had placed a £28m price tag on the Switzerland winger, who according to the Liverpool Echo is expected to leave the club this summer.

However, Football Insider has now claimed that the Anfield club accept they will struggle to fetch such a high fee for the 28-year-old, with the transfer market set to be hugely constricted as clubs’ income suffers heavily from the lack of football activity due to COVID-19 stopping the sport throughout Europe.

Reports of Liverpool’s reduced valuation for Shaqiri are likely to be well received by Sevilla, Roma and CSKA Moscow, all of whom are interested in signing the player, according to Football Insider.

The winger has become a bit-part player at Anfield, with only two Premier League starts and a total of 256 minutes of game-time in all competitions since the start of the season. Even before coronavirus caused football to shut down in mid-March, he hadn’t taken to the field for Liverpool in two months, and his last appearance saw him come on as a stoppage time substitute against Tottenham [via TransferMarkt].

Shaqiri’s sparsity of game-time owes quite a bit to injuries – a groin problem which first flared up during last summer’s UEFA Nations League finals recurred in Liverpool training in September and then January, so the 28-year-old has been rather unfortunate fitness-wise. However, he has never been a consistent starter in his time at Anfield – he was included in the first XI for only 11 league games last season. Also, of his 10 appearances so far in the current campaign, seven have lasted for 11 minutes or less, an indication that Jurgen Klopp very rarely offers him a real chance to impact proceedings.

Had Liverpool insisted that they still want £28m for the Swiss winger, it would send out a message that even in a market that is likely to become far more sedate, they value the player highly. Instead, their reported willingness to drop his valuation significantly in line with changing market conditions suggests that they are very much open to getting him off their books. That is despite James Pearce stating in a Q&A for The Athletic last week that the Reds should keep him if they don’t get the type of offers for which they had hoped.

Shaqiri would likely want to be somewhere where he would play more regularly and Liverpool seem prepared to offload him for a reduced valuation, so the signs appear to point increasingly towards him moving on from Anfield in the coming months.

Liverpool fans, would the club be right to reduce Shaqiri’s valuation to make him more enticing to overseas suitors or should they try to keep him for another season? Do you expect him to move on in the summer? Comment below with your views!