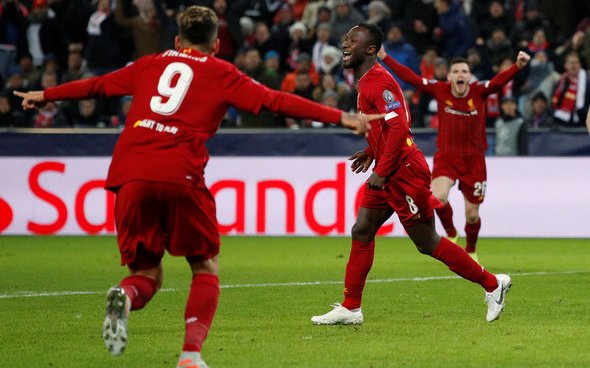 Former England goalkeeper Paul Robinson has said that Naby Keita has been “unlucky” at Liverpool and is “a big part of the future” despite rarely featuring for the Reds this season.

Football Insider reported this week that manager Jurgen Klopp has no intention of selling the 25-year-old in the summer, despite a report from German media outlet Bild claiming that his former club RB Leipzig were planning to bring him back to the Bundesliga.

Keita has only started four Premier League games in the current campaign and appeared as a substitute in another five, completing a full match just once in the division this term (as per TransferMarkt). However, Robinson has backed Klopp to keep faith with the Guinea international.

He told Football Insider: “Jurgen Klopp rotates his midfield a lot and that is what the top teams do. Liverpool are building a top squad and I think Keita is in his plans. I do not think Keita is somebody that will be looking to leave or in Klopp’s plans to move on.

“He is a big part of the future. When he has come in he has done OK, slightly inconsistent but he is still a top player. I think Jurgen Klopp will look to utilise him a lot more in the coming years. He has had a couple of unlucky injuries as well this season which have kept him out.”

Despite Keita’s lack of game-time this season possibly playing a part in raising questions about his future at Liverpool, Robinson makes some valid points regarding the midfielder. A significant factor in his struggles for a regular starting berth is his unfortunate injury record – he was sidelined for most of the concluding weeks of 2018/19 and was also afflicted by a muscle problem at the start of this season, as well as incurring a groin problem at the start of 2020 (as per TransferMarkt).

Whenever the 25-year-old has been given a chance, he has shown signs of being an influential figure from midfield. He is generally very tidy in possession – of all players to have started a league game for Liverpool this season, only two have a better passing success rate than his 88.9% – while just three Reds players have averaged more than his 1.2 successful dribbles per game. His willingness to help out defensively is reflected in his match average of 1.8 successful tackles, inferior only to Jordan Henderson and Fabinho.

Also, Keita has shown in his time at Liverpool that he can enjoy hot streaks. This time last year, he went from never having scored for the club to hitting three in five games. He didn’t score again until December but then found the net in successive appearances against Bournemouth, Red Bull Salzburg and Monterrey. All six of his Liverpool goals have come in quick bursts, a sign that he is capable of making a hugely effective contribution to the team when he is at his sharpest.

Keita might remain a frustrating player given his inability to stay fit for long enough to properly hold down a place in the team but, as Robinson has said, he has shown on occasions that he can be an important player for Klopp, which would likely explain why the manager is continuing to back him as a squad member if not yet a regular starter.

Liverpool fans, do you agree with Robinson’s verdict on Keita? Can you see the 25-year-old becoming an integral part of Klopp’s line-up in the future? Tell us what you think in the comments section below!