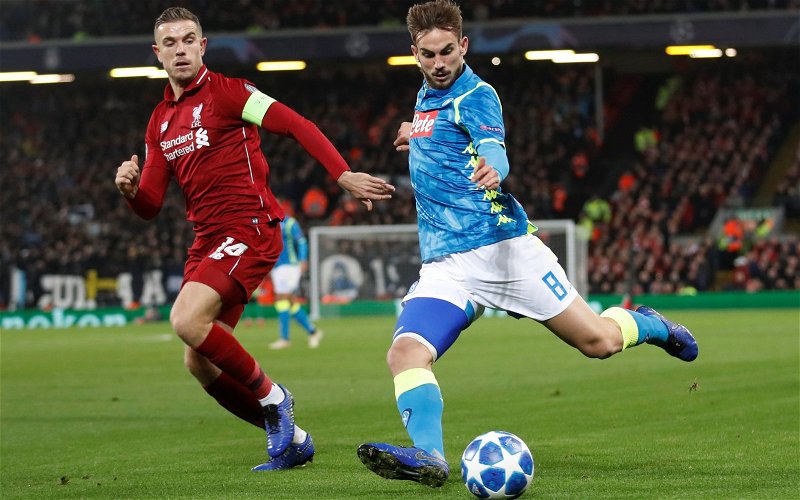 A number of Liverpool fans have called on the club to sign Napoli midfielder Fabian Ruiz after the Serie A club substantially reduced his valuation.

As reported by Gazzetta dello Sport, Napoli have reduced his asking price from €80m (£70m) to €60m (£52m) amid financial constraints arising from the global coronavirus pandemic. The Daily Express have claimed that the 24-year-old is among Liverpool’s chief transfer targets in a summer which will likely see Adam Lallana depart Anfield upon the expiry of his contract in June. On Twitter, @AnfieldEdition informed followers of the update on the Spain international.

Ruiz boasts an excellent passing success rate of 90.5% this season, eclipsed only by Georginio Wijnaldum (90.9%) among Liverpool players to have started a Premier League match in 2019/20. His match average of 2.4 shots is higher than that of Sadio Mane (2.3) and his average of 1.5 key passes per game is better than any of the Reds’ midfielders. Ex-Liverpool striker Emile Heskey recently implored the Anfied club to sign the 24-year-old when speaking to GentingBet [via The Mirror].

After hearing of Napoli’s reduction of Ruiz’s asking price, these Reds fans on Twitter joined Heskey in pleading with the club to bring him to Merseyside:

I would take this lad in a flash.

Get it done. Hendo-Gini-Ruiz = 75% possession while playing hoofball. Unreal https://t.co/F7jt2dbMbr

Snap their hand off https://t.co/r2kQfHQ5bT

Should Liverpool make a move for Ruiz now that his asking price has been reduced by 25%? Do you think he would be the ideal replacement for the seemingly exit-bound Lallana? Comment below with your views!