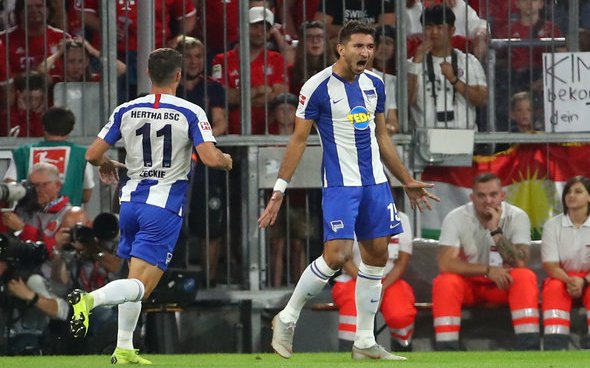 A number of Liverpool fans have called for Marko Grujic to be kept at Anfield next season rather than being sold, with a choice of the two options presented to supporters by @AnfieldWatch on Twitter.

The 24-year-old midfielder has been on loan at Hertha Berlin for the last two seasons and also had a spell at Cardiff, having struggled to establish himself at Liverpool since first coming to Anfield in January 2016. He has managed only 14 first team appearances for the Reds, eight of which came during the 2016/17 campaign.

Grujic revealed in a recent interview for The Athletic that he maintains regular contact with Julian Ward, Liverpool’s loan pathways and football partnerships manager, while Football Insider pundits Kevin Phillips and Alan Hutton have both cast doubts on his future at Anfield over the last couple of weeks.

The Serbia international has obtained regular game-time at Hertha Berlin, scoring eight goals in 45 matches during his time in the German capital, and showed a glimpse of his potential for Liverpool with an exquisite looped header in a pre-season friendly win over Barcelona at Wembley. Also, he has the versatility to adapt to either a defensive or attacking midfield role and there could be a vacancy in the squad if, as tipped by the Liverpool Echo, Adam Lallana moves on in the summer.

These Reds fans on Twitter want to see Grujic get his chance at Anfield next season, with one Kopite dubbing him a “free replacement for Lallana“:

Keep! He is a free replacement for lallana! ?

Definitely keep. Had two good years at Hertha and would be a very good squad player, especially if Lallana is leaving. Also adds important cover to fab

Keep if he is performing, has some good attributes as a player.

Absolutely KEEP he is a machine

Keep could be a good back up to Fabinho

Do you think Grujic deserves a sustained chance to prove his worth at Liverpool next term or should the club move him on if he isn’t going to break into the team at 24? Join in the discussion by commenting below!