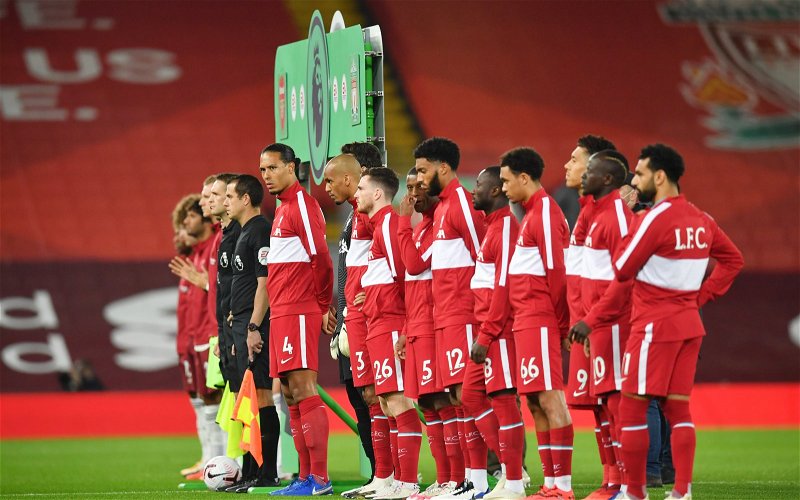 While the first half of our game against Arsenal was eventful, supporters believed that one player in red did not make enough of an impact.

Andy Robertson’s error gifted Arsenal to an undeserved lead through Alexandre Lacazette. Almost immediately, Sadio Mane levelled the affair and Robertson was unmarked at the back post for our second.

On the subject of goals, there was one man who wasn’t among them during the first period and it was Roberto Firmino.

We know that his work off the ball and his selflessness towards his teammates is why we love him so much. But many took exception to his lack of involvement against Mikel Arteta’s side.

Firmino, who earns £180,000-a-week with us (per Spotrac), is the man with the least goals out of our famous front three, finding the net from 78 times in 247 appearances, while both Sadio Mane and Mohamed Salah are in our top 20 goalscorers of all time.

However, segments of the Kop faithful did not take any of the above into consideration and here are some of those comments that were made on social media.

To say that he’s finished is going a bit too far, Nathan…

To me, he looks like a man that is low on confidence. Benching him will only make this worse. That being said, it would be interesting to see how Diogo Jota would handle himself in his role.

Firmino needs to be benched.

I can agree with this comment from Adam. Firmino has phenomenal technical ability and lightning-fast feet. On occasions, I feel he should show it off more rather than playing the role of the provider all the time. After all, we all remember what he did against Arsenal two seasons ago…

Still think more is needed from #firmino in games like this as a 9, cant rely on salah and manè every time, has to be more selfish and clinical at times! #LFC #LiverpoolFC

Firmino really needs to step up, I love him but his performances have been average at best for awhile now