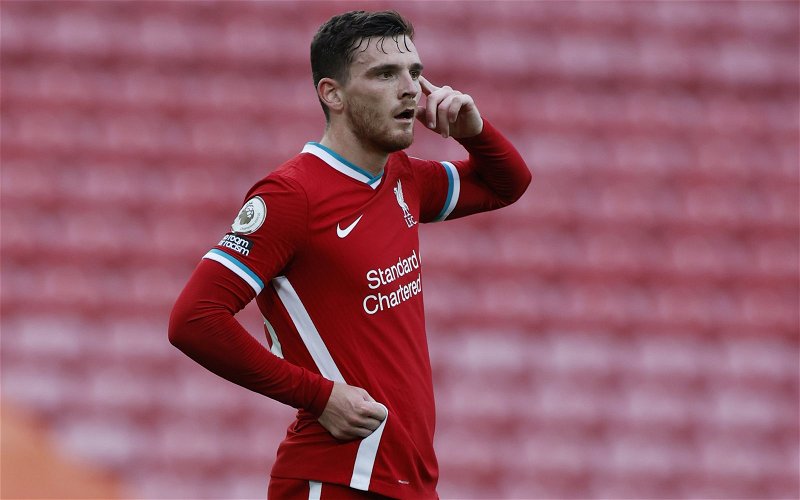 Andy Robertson has had a phenomenal career at Liverpool, and he has even taken the time to write extensively about it.

The Scotland skipper has released a book titled ‘Now You’re Gonna Believe Us’, in which the 26-year-old opens up about his career as a whole. From life as a schoolboy to the present day.

Before making his move to Liverpool for a mere £8m in 2017, Robertson was signed up by Steve Bruce when he was managing Hull City, having been convinced to move to the North East from Scotland.

It was during his time there when Jurgen Klopp and his scouts picked up on the Scot’s talent, where he scored five times and provided 10 assists in 115 appearances, as per TransferMarkt.

Speaking with the Daily Star, Robertson spoke glowingly about Bruce and how he became an influence in his career.

“Some managers have a knack of saying the right thing at the right time to get you to respond in the right way,” he said.

“[Klopp] is obviously like that and another is Bruce, who was a big influence on me at Hull City. This time, as manager of Newcastle, he wouldn’t be giving me any motivational speeches to spur me on.

“He played such an important role in my career, bringing me into English football with Hull City and helping me improve my game to such a level that a club like Liverpool ended up signing me.

“Hull came in for me when I was at Dundee United and, to be honest, English football scared me a bit at that time but Steve convinced me, telling me I was definitely good enough and that he would look after me.

Robertson continued. “I genuinely think that if he had not been so positive and encouraging, I would have stayed in Scotland.

“Some managers have that ability to get you onboard just through their own integrity and Steve definitely falls into that category.”

It is interesting to hear Robertson hold Bruce in such high regard, even though the man himself does not have the best reputation in the world when it comes to Premier League managers.

The £57.6m-rated talent’s career path will be an influence not just for defenders coming through, but for all youngsters at Melwood. He is the perfect example that individuals should never give up.

Credit where credit is due, Bruce deserves praise for where Robertson is currently at, having helped him on his path to greatness.

Now as a Champions League and Premier League winner, it is important that the Scotsman acknowledged the talents of his former manager, which he did brilliantly.