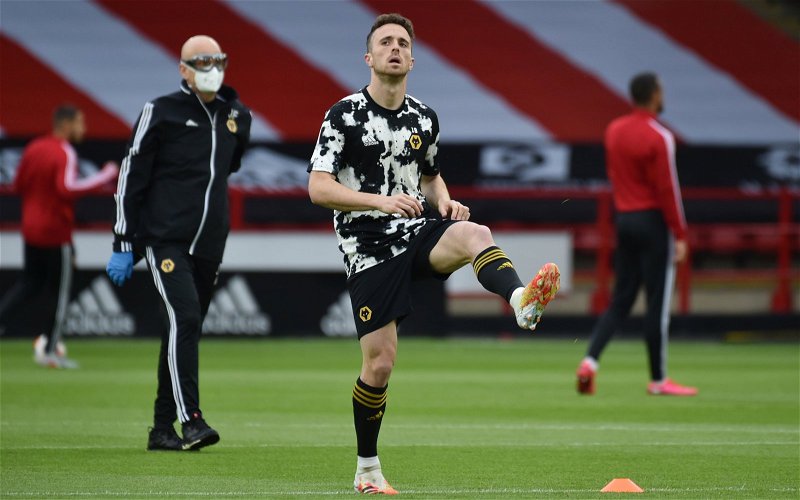 What an amazing 24 hours it has been for Liverpool, and we are just an official announcement away from it getting a whole lot better.

We all exploded with delight when Thiago Alcantara was unveiled in the famous red shirt yesterday. But within 12 hours of that, Liverpool are now on the verge of signing the Wolves winger Diogo Jota.

The Athletic revealed that we will pay a fee of around £45m which includes possible add-ons, with a £41m initial fee which will rise depending on the number of appearances and success he has with us throughout his contract.

Speaking on the Liverpool Echo’s Blood Red Podcast, Matt Addison was delighted with our latest signing and aimed his praise at one man, in particular.

“It’s another Michael Edwards masterstroke isn’t it?”, he said, “A player that people are keen to watch. He’s one of those players that just has to find that extra level of consistency now and we saw the exact same thing with Sadio Mane who is the perfect example.

“I’ve seen many of Wolves reporters and fans saying that last season, Jota was a little bit consistent and maybe didn’t perform to the level the season before that. But then you look at the number of goal contributions which was 22 in 48 games and scored nine goals in 14 Europa League matches last season.

“These sort of numbers even for someone who plays out wide in those forward areas are just so impressive. He’s not 24 until December and I’m pretty sure that Mane was 24 when he came to Liverpool so they are at the same stage of their careers.

Addison added that it’s obvious that Jota is being brought in as a backup for our notorious front three, and it gives us extra strength in depth in the striking department.

Well, what more can I add to that? I couldn’t have put it better myself. It really is another masterclass from Edwards and his team to get Jota through the door.

I suppose I thought that Sarr would have been the man coming through the door. But like Fabinho, out of nowhere, the Portuguese forward is the man that is announced as the new addition to our squad.

It really is some clever stuff from the club to get this deal done, even though I feel that the price is a little inflated for him.

But we will be obtaining a player who likes to get involved in attacking build-ups, can score goals and assist, as well as produce an eye-through-a-needle pass if required. Jota really does bring a lot of quality to our already strong squad.