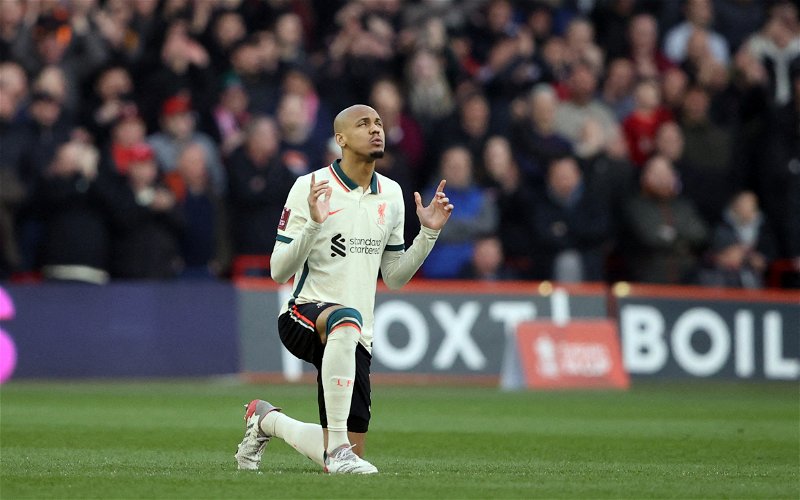 Jurgen Klopp has delivered an injury update ahead of Liverpool’s crunch clash against Manchester City on Sunday afternoon.

Following the 3-1 Champions League victory over Benfica in midweek, the German manager had some concerns surrounding the fitness of Fabinho after the midfielder suffered a clash of heads in the closing stages.

In his post-match interview when talking about the 28-year-old earlier this week, he said:

“He had a cut in the back of his head and obviously he has no hair to hold the blood back, that’s why they needed a bit of time.

“But he should be completely fine.”

Since then, it seems that the Brazilian has fully recovered from the incident, amid Klopp giving some positive news on the health of his squad.

When asked for a fitness update during his pre-match press conference on Friday morning, the boss said:

“When I looked last time on my smartphone, it looked like everyone is available again.”

Fabinho being available for selection again comes as a huge boost for the Reds, as he is someone who has proved to be influential for his side in the middle of the park.

Not only has he made six goal contributions in the Premier League so far this season, but he also has a current pass success percentage rate of 87.3% and averages 1.7 aerials won per game, via WhoScored, showing that he has the ability to take control of the midfield and can dictate his team’s play easily in front of the back four.

The £54m-rated talisman, who has been hailed as a “top player” by fellow Liverpool teammate James Milner, will no doubt be over the moon that he is fit for the vital, and quite possibly title-deciding game against Pep Guardiola’s City this weekend, and if the Anfield outfit are to claim all three points in a bid to get their hands on the trophy come the end of the season, they will need all the firepower accessible to them.

In other news, Fabrizio Romano has revealed a huge update on a Liverpool summer transfer target. Read more here.