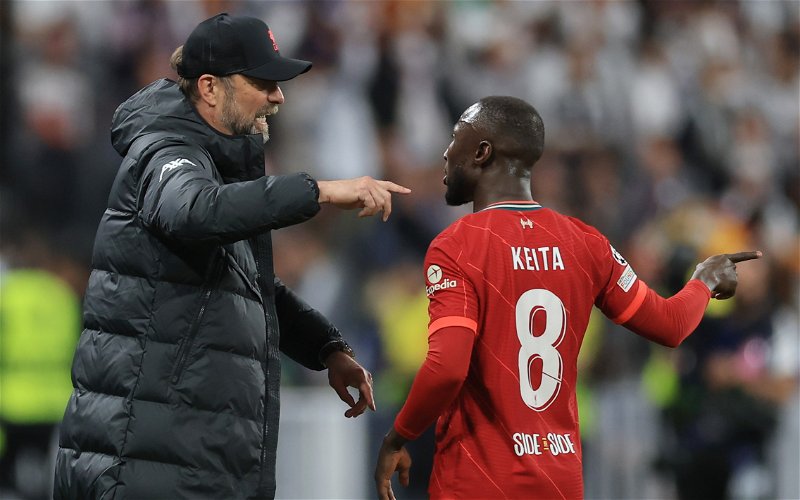 That is according to Sky Sports Germany reporter, Florian Plettenberg, who claims that Keita is unhappy with his current situation at Anfield, with talks over a contract extension currently paused.

“Excl. News Naby #Keita: He is unhappy with his current situation in Liverpool. There were talks about a contract extension but they have stopped now. His departure is possible regardless of Thiago and Oxlade-Chamberlain. But early stage. Talks will take place.”

As Plettenberg states, there were initial talks about a contract extension but Keita’s change of heart, amidst a lack of game time, means that the pressure will be piled onto Liverpool to delve into the transfer market to sign a replacement midfielder.

The Reds have already been left short of options in the engine room, in wake of injuries to Thiago Alcantara, Alex Oxlade-Chamberlain and Curtis Jones, with other options either too inexperienced or too old to rely on throughout the rest of the season.

“It’s not that we deny signing a player if we have a problem with injuries, for example. But it is a completely different situation to the beginning of the pre-season when everybody told me we needed a new midfielder and that was about the kind of midfielder.

“Now the situation has changed slightly – we have more injuries, that’s true. But it can still only be about the right [player] and that is not easy. It is nothing to do with that it is now August already and at the end of August, the transfer window closes.”

With talks over Keita’s future set to take place, they could potentially be ground breaking in regards to the potential knock-on effect for Klopp’s side.

To find a player of Keita’s quality who would be willing to play a bit-part role in the side with just two weeks to go in this summer’s window, would be a difficult feat in itself.

At the age of 27, he will be looking for more consistent minutes and with talks set to take place, it remains to be seen as to what kind of importance Klopp places on the former Leipzig midfielder.