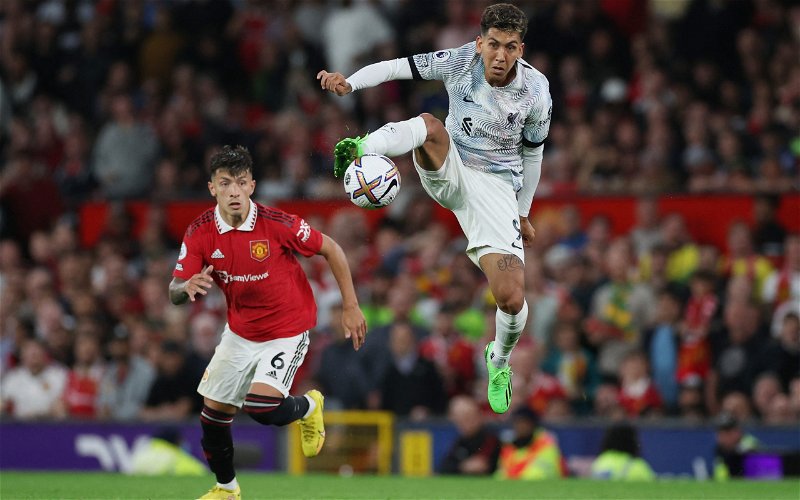 Liverpool face the shock prospect of losing Roberto Firmino, with Serie A giants Juventus said to be interested in a January swoop.

That is according to transfer insider Dean Jones, via GIVEMESPORT, who claims that the 30-year-old Brazilian could be on his way to pastures new, due to the fact that he has entered the final year of his contract, with no sign of a new deal on the horizon.

Amidst Firmino’s current situation, Jones has delivered news that Turin-based giants Juventus are “keeping an eye” on the Brazilian’s status at Anfield.

Though, the insider cannot see a world in which Liverpool would be willing to sanction the sale of a first-team forward halfway through the season.

Speaking to GIVEMESPORT, Jones said: “Juventus are keeping an eye on Roberto Firmino’s situation in the coming months.

“They are in a bad place at the moment, so if he is not getting many minutes, I can see them trying to sign him in January. I’m sure Liverpool wouldn’t accept that halfway through the season, but we shall see.”

Klopp will be disappointed

Having already lost Sadio Mane from his formidable attacking set-up, Jurgen Klopp will surely be against the sale of a unique forward like Firmino.

During his time at Liverpool, the Brazilian has asserted himself as one of the best false-nines in world football, with his presence as a deep-lying forward perhaps the biggest complimentary asset to Liverpool’s wide-men.

With an average of 61.90 touches, 41.97 carries, and 2.97 shot-creating actions per 90, Firmino is also one of the most underrated entities in the world footballing landscape.

His ability to assert himself into the game is often key in Liverpool’s attacking transitions, and his movement in the role of a false-nine enables additional rotation to take place.

Firmino is also one of the greatest defensive-strikers that the game has ever seen, with his average of 3.08 tackles, 21.99 pressures and 6.51 ball recoveries a notable homage of his time spent as a defender up until the age of 17.

Whilst Klopp can summon goals from the likes of Diogo Jota and Darwin Nunez, he cannot replace Firmino’s unorthodox presence in the frontline and he should do his best to keep the 30-year-old for this fact alone.