“We spoke a lot…”: Klopp gives Salah assessment after draw with Everton 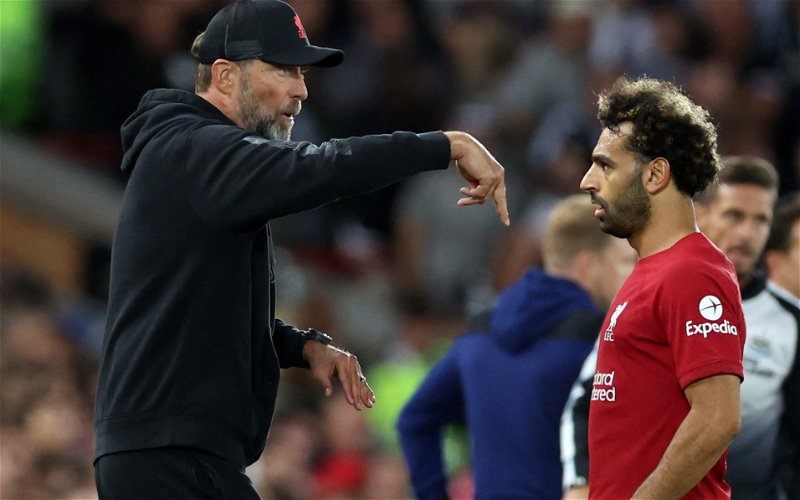 After Saturday’s 0-0 draw in the Merseyside derby, Liverpool manager Jurgen Klopp gave his assessment on the matters that occurred.

Taking to the post-match press conference, the German boss was asked to give his thoughts on the game (via Liverpoolfc.com):

“I think that we had the last chance, which was a massive one, we could have won it then absolutely. Ali had to make two incredible saves and they scored a goal which was disallowed for a small offside, but obviously offside. So, [it was] intense like always and we were ready to fight after a super intense game on Wednesday, we tried to fight.

“Especially then of course in the second half it looked like an end-to-end game because after our set-pieces we didn’t defend the second balls they had particularly well. We had good set-pieces but we didn’t finish it off or when we got another one we were slightly too open and they used that in these moments pretty well. Apart from that they didn’t cause us a lot of problems or whatever, but we had to dig in deep obviously [and] that’s what we did.”

And whilst Klopp went on to address his reasoning behind the substitution of Trent Alexander-Arnold, stating that it was purely to manage his minutes, it was his revelation on Mohammed Salah that made for the most awakening detail.

Asked whether Salah is spending more time out wide this season, the boss said:

“No, it’s not more than other seasons or whatever, I’m not sure what you see there. We want to have Mo there in this position but we want to have Mo, and we always had him, more often in central positions as well.

“Today especially we wanted to use the boys a bit more centrally, but we didn’t have a lot of time to train obviously. Actually we only recovered, we spoke a lot about it, I’m not sure I was clear enough in the first half what we wanted.

“In the moments when we played, when Mo dropped or when Lucho dropped after two or three passes they were completely free in between the lines because Darwin kept the last line back with his pure presence and they like to drop pretty early.

“But we didn’t do that often enough, you are right. I don’t think in the season he is too often wide, maybe today in a few moments yes. But he could have scored again in the last minute pretty much.”

Despite originally playing down the question, defending the winger’s positioning, Klopp ended his answer by stating the Egyptian was indeed functioning too wide on the day.

Despite two goals and two assists representing good value from the first six games of the season, by Salah’s standards, it’s a somewhat sorrow start.

The 30-year-old, who has scored 159 goals for Liverpool, achieved this total in just three games last season, and by the end of gameweek six, had registered seven goal contributions in the form of five goals and two assists.

From the heatmap data so far, whilst acknowledging the caveat of contrasting sample size, we can conclude that Salah has occupied very similar areas on the right flank, hugging the touchline no more than last season.

Though, there are two major differences; the first being his lack of inversion into the half-space and beyond. The Liverpool-great is indeed occupying positions in the penalty box at a much lesser rate compared to last season.

This could be a result of Liverpool’s recent addition in target-man Darwin Nunez, who carries a certain gravitas in the penalty area, but that’s a debate for another day.

The biggest difference in positioning compared to last season is Salah’s lack of depth. The “prolific” 30-year-old, as dubbed by those at BBC Sport, is not tracking back as often, nor as deep – rarely leaving the opposition half to get involved in the build-up play.

Instead, he is occupying positions that see him hug the touchline and has been marked out of the game on multiple occasions.

Whether this is a conscious effort to conserve energy remains to be seen, but Salah is categorically occupying different positions in comparison to what we are used to, and he is lacking impact in Liverpool’s build-up play as a result.