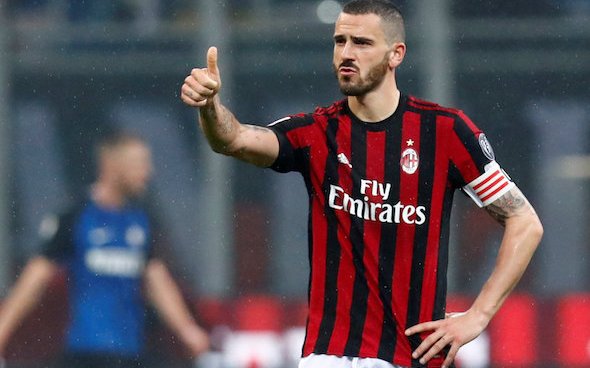 Liverpool look to have wrapped up their spending this summer after splashing out around £160million on four new faces ahead of the 2018/19 season.

Despite this outlay there remain concerns over the Reds’ defence, with manager Jurgen Klopp not having bolstered his back line yet this window.

And it does not look like the German has any plans to do so, telling Sky Sports: “This summer, no. I don’t see the need. Joe Gomez, playing in that role as a central defender, he combines a lot of things you don’t find on the transfer market so I don’t see the need at the moment.”

Klopp did however admit that things could change, saying: “But, 12 days to go in the transfer market, a lot can happen. So now I say no, maybe you ask me tomorrow and I’ll say something different.”

Anfield legend Steve Nicol has now waded into the debate, with the former Liverpool defender calling on the Reds to go in for AC Milan defender Leonardo Bonucci before deadline day.

Speaking on ESPN FC show Extra Time (2:33), Nicol was asked whether the club should consider the 80-cap Italy international this summer, and said: “Absolutely. Absolutely, yeah. Why wouldn’t you? Unfortunately I’m not in charge or I would.”

Despite Dejan Lovren’s resurgence in the final half of last season, the fact remains that the Croatian is far too inconsistent for Liverpool to rely on him for the whole season.

Bonucci is the opposite of that, with the 31-year-old using his vast experience to put in stellar display after stellar display for his club, and Liverpool could do with a player like that.

He would be the perfect partner for Virgil van Dijk, and playing with Bonucci would also help the Dutchman continue his development no end.

AC Milan are in the midst of financial difficulties, and Liverpool must now take advantage of this to secure a deal for Bonucci in the final days of the window and put themselves firmly in the frame to challenge for the title next season.