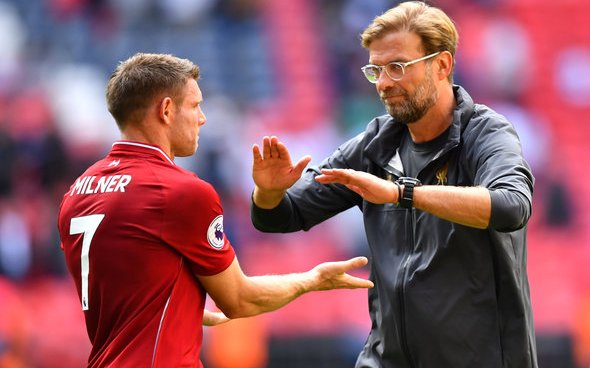 For all Liverpool’s flair and finesse, with exquisite attacking football, Klopp has found room for a player who perhaps isn’t the prettiest on the eye but still does a very important job for the Liverpool team.

The man in question is, of course, James Milner. On paper he isn’t your typical ‘Klopp player’ but has proven time and time again just how valuable his experience truly is.

Liverpool’s 3-2 win over Paris Saint Germain at a packed Anfield, on matchday one of this Champions League campaign was one such example. The key to Liverpool’s victory, though it only just transpired, was to neutralise Neymar. The obvious pick there was Milner, given his seniority in experience over the Brazilian, and he marshalled him to within an inch of his life.

Unable to get into the game, Neymar’s frustrations worked against him, and undoubtedly proved to be a key difference between the teams on the night. That said, Milner did not lower himself to the brutish standards of many other Liverpool players from yesteryear, like Neil Ruddock and Graeme Souness, and he is so much more than the traditional ‘bully’ that home sides often desire to employ in European competitions.

The fact that Milner was able to keep pace with Neymar throughout his time on the pitch was a huge testament to just how evergreen he is. His mind is also as sharp as ever, having arrested a run from Angel Di Maria in the latter stages of the game, when nobody else had spotted the Argentine winger. Then, of course, there was the penalty he dispatched with aplomb, and he is the consummate penalty expert.

Just like it is said that good goalkeepers can save ten points a season, having a good penalty taker can add many more points than people realise. He is, however, still capable of offering something in offense too. While nobody is under illusions as to who the main sharpshooters are, his experience playing on the wing is also of value. Again, the PSG game serves as a prime example of this, with Milner providing a number of excellent crosses – the rate of which only increased as time went on.

With eight assists, Milner was also the top man in that department during last season’s run to the Champions League final, and as you can see, his presence in the squad keeps Liverpool as one of the favourites in spread betting markets for the Champions League and Premier League. The additional fact that he is frequently favoured over summer arrivals Fabinho and Naby Keita also speaks volumes, and some statistics from the 2017/18 campaigns of all three players make this stand to reason.

Despite being afforded 1,144 minutes of top flight action less than Fabinho (87%) last season, James Milner nearly matched that with a pass completion rate of 86%. Keita, meanwhile, managed to complete just 81% of his passes in a Bundesliga some might consider far less competitive and demanding than the Premier League.

Milner’s take-on success rate of 2017/18 also dwarfs that of Fabinho and Keita, with the Yorkshireman winning 84.2% of his take-ons. He also averaged just 0.75 fouls per league game last season, which is comfortably less than half of the fouls-per-game rate that his now-teammates did.

Although the Premier League is now a heady mix of balletic ball control, inch-perfect passing and jet-heeled pace, there is always room for the classic ‘English’ player. Right now, Milner has the capability to use his physical prowess, vast experience and unrivalled vision, but also become known as the midfield guardian.

Milner’s presence also gives added confidence to his two fullbacks, both of whom still have room to learn and grow despite being integral to Liverpool’s improvement under Klopp. With his ball control and ability to marshal his fellow Reds, he gives the likes of Andrew Robertson, Trent Alexander-Arnold and even Joe Gomez more time to think, and more confidence in getting forward.

In turn, this is a vital part of Sadio Mane and Mo Salah keeping their potency, as Alexander-Arnold and Salah formed the unlikeliest of success stories. In conclusion, the Reds are undoubtedly more effective with Milner in the side. Case closed.