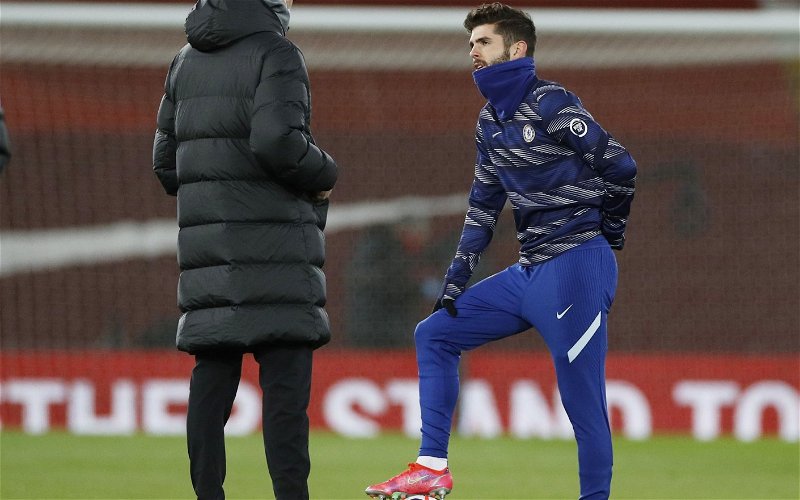 Liverpool are ‘keeping tabs’ on Chelsea forward Christian Pulisic‘s situation as the USA international falls down the pecking order under Thomas Tuchel.

That’s according to a report from the Daily Mail, who claim the Reds, along with Bayern Munich and arch-rivals Manchester United are ‘on alert’ regarding the possibility of signing the 22-year-old.

Pulisic is yet to start a Premier League match since Tuchel took over at Stamford Bridge and the American could be considering his future under the manager who gave him his debut during their time together at Borussia Dortmund.

Having named the 22-year-old on the bench during Chelsea’s 2-0 victory over Everton on Monday night, Tuchel said: ‘Christian’s (Pulisic) problem is I know from Dortmund how strong he is from the bench’.

Prior to signing for the Blues in 2019 for £58m (BBC), Liverpool were one of the major protagonists interested in a move for Pulisic.

Last season the American ace, who was hailed as having an ‘incredible gift’ by former boss Frank Lampard, was a mainstay for Chelsea, directly contributing to 21 goals in 34 appearances in all competitions.

Signing Pulisic from a likely Premier League title contender next season would be a huge statement from the Reds.

Capable of playing across the frontline, the 34-cap international would afford Jurgen Klopp an abundance of flexibility and much-needed strength in depth in attacking areas.

Valued at £54m by Transfermarkt and contracted until 2024 in west London, this would no doubt be an expensive deal for the club – however, if he should continue to go unused, there remains a possibility the player himself could angle for a move away.