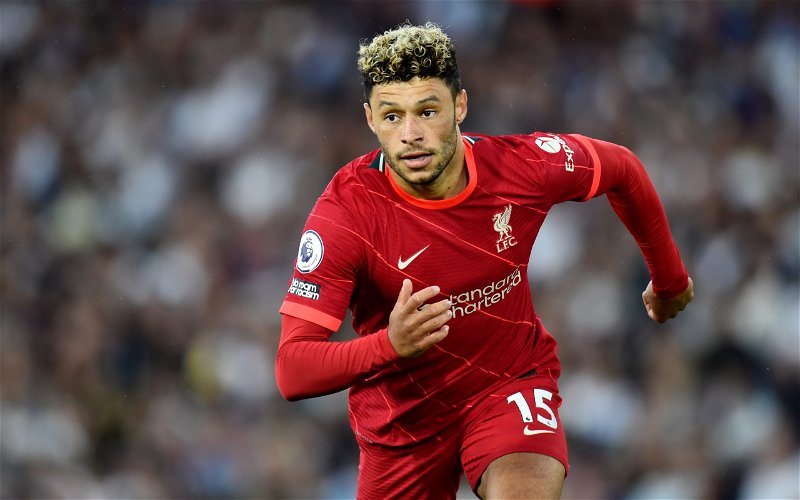 The Lowdown: Out of action

The 28-year-old, whose contract at Anfield is set to expire in 2023, was completely left out of the Reds’ 4-0 victory against Manchester United earlier this week, and has only made one of their last four matchday squads in all competitions.

As a result of this, Campbell believes that now would be the perfect time for the £125k-per-week talent to depart Merseyside in the hunt for more minutes.

When asked for his thoughts on the situation, the former striker told Football Insider:

“I cannot see him staying.

“He won’t be in that World Cup squad because he isn’t playing enough football.

“I think the time has come for him to play elsewhere. If he waits until the end of his contract, fair enough. The writing is on the wall though.”

The Verdict: Right time to go

Oxlade-Chamberlain has been a great servant to the 19-time English champions since arriving from Arsenal back in 2017, but now would be the right time for him to go, should he want to have any chance at reviving his career.

The 35-cap international has only made nine Premier League starts under Jurgen Klopp this season, and now with the likes of youngsters Harvey Elliot and Curtis Jones coming up through the ranks in that midfield position, not to mention the imminent signing of Fulham ace Fabio Carvalho, it would seem like his time at Liverpool may have reached an end.

Despite being hailed as “outstanding” by the German boss, it’s obvious to see that the £16.2m-rated star has dropped down the pecking order in recent weeks, and if he has any ambitions to somehow make Gareth Southgate’s World Cup squad later this year, then he will have to start looking for regular football elsewhere in an attempt to prove that he can still be the player he once was.

In other news, there has been a huge transfer update on one of Liverpool’s summer targets. Read more here.