Liverpool should allow Joe Gomez to leave in the summer 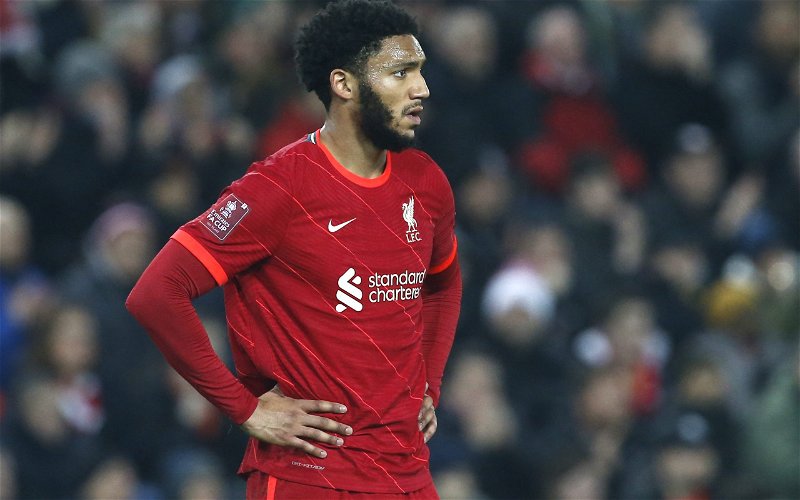 Whilst things are currently going well for Liverpool on the pitch, there is no doubt a huge focus behind the scenes off it, surrounding various contractual situations ahead of the transfer window, and one of the players who has recently been linked with a summer move away from Anfield is Joe Gomez.

In a recent Q&A with Anfield Watch, transfer expert David Lynch has suggested that he thinks a departure is on the cards for the centre-back.

After having a slower return from injury than expected, the 24-year-old has never really been able to force himself back into the Reds’ starting XI and so it wouldn’t come as a shock to see him look elsewhere come the end of the season.

Since arriving in Merseyside from Charlton back in 2015, Gomez has been an incredible asset to Jurgen Klopp’s side over the years.

But following the signing of Ibrahima Konate last year, not to mention the partnership that Joel Matip has formed alongside Virgil Van Dijk in his absence, realistically he probably won’t get a look in next campaign.

The 11-time international has only made five appearances for the Merseysiders this term, playing a total of just 102 minutes of football, as per Transfermarkt, and so with a limited amount of game time, he will want to be at a club where he knows he will be getting played, week-in, week-out – especially if he wants any kind of shot at reviving his England career.

Former professional Gabby Agbonlahor has also claimed that he feels it is the right time for the £85k-per-week outcast to move on. Speaking exclusively to Football Insider, the ex-striker said:

“I feel like Gomez needs to leave right now.

“Trent Alexander-Arnold rarely misses games so he’s not going to get in at right-back. At centre-back, you’ve got Konate, Van Dijk, and Matip all in front of him.

“He needs to go now and play some regular football.”

Despite not having the opportunity to make many contributions on the field, Klopp has still hailed his defender as an “outstanding” player, and whilst it would be sad for Liverpool fans to have to say goodbye to him, for someone who is currently valued at £19.8m, there will no doubt be plenty of interest for him in the summer where he will hopefully be able to start a new chapter of his career.

It could provide the Reds with some financial investment, one they could use to bolster other areas of the playing squad. It’s about time the two parties went their own ways this summer.

In other news, a Liverpool transfer target has delivered a huge contract update. Find out who here.