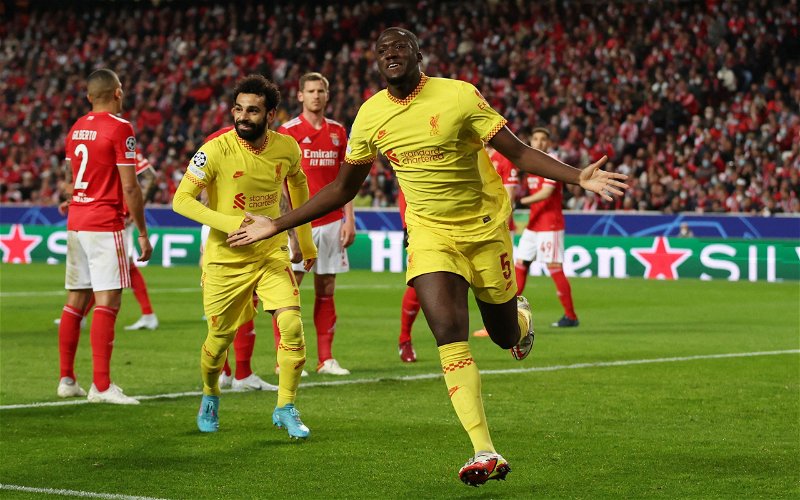 Liverpool defender Ibrahima Konate has recently taken to Instagram to celebrate scoring his first goal for the Reds.

The 22-year-old first arrived on Merseyside from RB Leipzig last year and having made 20 appearances in all competitions so far this season, the Frenchman finally got his reward by netting the Anfield outfit’s opener in their 3-1 Champions League victory over Benfica on Tuesday night.

Taking to the social media platform to express his delight, Konate said:

“Good to get the win before the 2nd leg, it is with mistakes we learn!”

Whenever the £27m-valued centre-back has been chosen to play alongside Virgil Van Dijk on the European stage this campaign, he has displayed some impressive performances and has been able to form a strong partnership with the Dutchman.

Konate currently has an 88% pass success percentage rate in the Champions League, showing his ability to coolly play out from the back, and is averaging 2.8 aerial duels won, earning himself an overall match rating of 7.08, via WhoScored.

The Paris born-talent received some high praise after the game and it was from none other than his fellow teammate Alisson. When speaking to the club’s official website about Konate, the keeper said:

“He’s a young player, a big talent with a lot of qualities. He is a good defender, a top guy and a really nice person as well. I’m happy to have him on the team and we can count on him as well to score goals.”

Jurgen Klopp also has the likes of Joel Matip and Joe Gomez available to play in that position should he ever feel like mixing his side up in the later stages of the competition, but as for now, there would be no reason to change a winning formula.

In other news, Fabrizio Romano has dropped a huge claim that will excite Liverpool fans. Read more here.