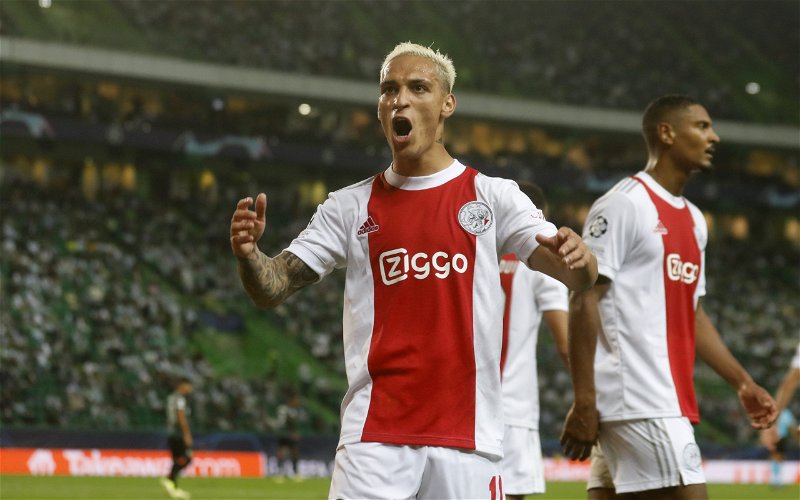 Liverpool are one of several Premier League clubs said to be interested in Ajax winger Antony.

That’s according to Portuguese news outlet UOL, who claim that Liverpool are to battle it out with Manchester United over the Brazilian’s signature.

The report suggests a ‘dispute’ for the player between the North-West rivals, with Newcastle also interested but currently considered “out of contention”.

Liverpool will first want to prioritise the future of Mohamed Salah before dipping into the transfer market, as his current deal is set to expire in the summer of 2023.

Since signing for the Reds in January, Luis Diaz has been a sensation in every competition he has set foot in.

The signing of Antony has shades of the Diaz deal, due to their shared incredible flair and potential to unleash the spectacular and unexpected, which sets them apart from Salah and Mane.

The £31.5m-rated trickster has enjoyed a stellar season for Ajax, with 22 goal contributions across all competitions and an incredible average SofaScore rating of 7.44. His consistency could force a selection headache for Klopp, who already possesses a wealth of attacking talent.

This season, Antony ranks in the 99th percentile for total shots per 90, likening him to Salah in that regard.

His fearlessness to try something extraordinary when he feels the opportunity arises could benefit Klopp, who so often gets frustrated by teams in a low block. This is further demonstrated in his 54.72 passes attempted per 90.

His ability to collect the ball and drive his team up the field is also something which him and Diaz share, but again Antony boasts a higher amount of progressive carries per 90 with 11.60.

With Antony and Diaz on both wings, Premier League fullbacks would be even more terrified at the prospect of facing Liverpool than they already are. An increase in depth in these positions can only benefit a side always chasing big spenders Manchester City.

Klopp often bemoans the scheduling of his fixture list, which is ever-growing due to Liverpool’s assault on all fronts for the quadruple. If he is to challenge again next season, he could do worse than the Brazilian dubbed “the new Neymar” who has been lighting up the Eredivisie since he signed for Ajax in 2020.