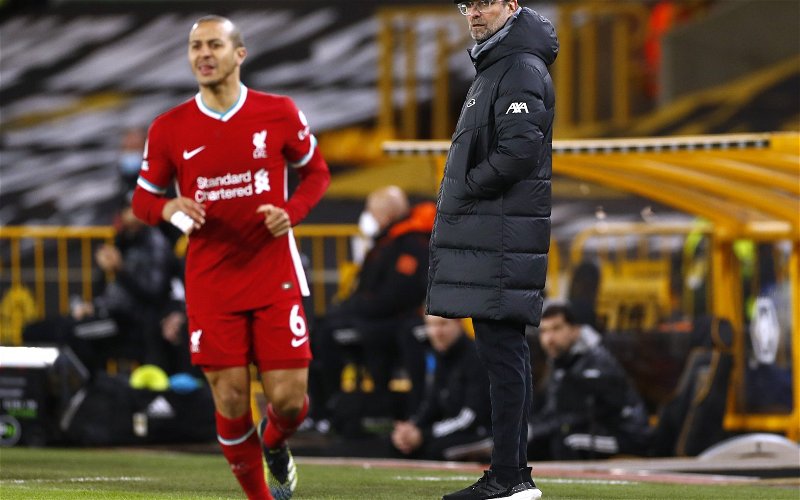 Liverpool midfielder Thiago has revealed the decision to join the Premier League champions last summer was an ‘easy decision’ once he had received a call from Jurgen Klopp.

Things haven’t necessarily gone to plan since the Spaniard’s arrival on Merseyside from Bayern Munich, with the Reds decimated by injury and his own knee issue sidelining the 29-year-old for the best part of three months.

However, a supremely talented midfielder who everything club football has to offer, 31 trophies in total, Thiago has opened up to Spanish newspaper AS about his decision to join Liverpool.

“I had options to return (to Spain), but it was clear to me, leaving Bayern was to be able to live the experience of the Premier League, a very competitive league.

“When I got the call from the coach (Jurgen Klopp) and the club, it was an easy decision to choose the destination. But it was difficult to choose if I really wanted to leave Bayern. In the end it happened and I am very happy.”

The former Barcelona man went on to discuss his adaptation to a new league and his excitement about seeing ‘beautiful’ Anfield at full capacity in the near future.

Thiago, who is currently away on international duty with Spain, will be hoping to help guide Liverpool to another UEFA Champions League semi-final and perhaps a top-four Premier League finish on his return.

It’s been almost impossible to judge any Liverpool player this season given the tribulations of the campaign, let alone Thiago.

Signed to transform the way the Reds operate and unlock defences, the Spain star has been unable to have the desired impact.

But with a track record like his, it’s safe to assume in the fullness of time he will prove to be a hit in Jurgen Klopp’s squad.